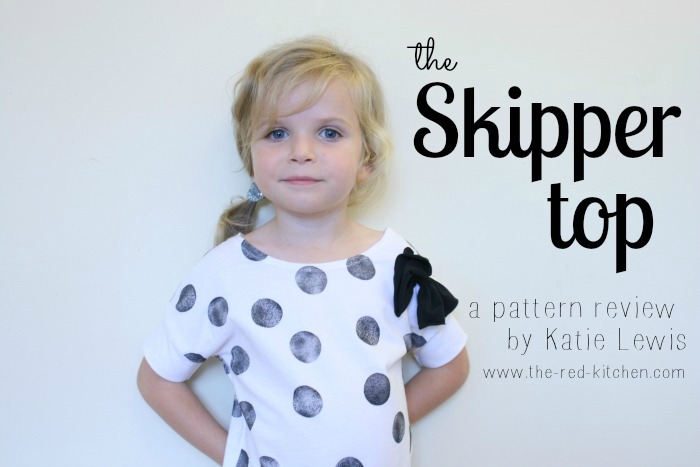 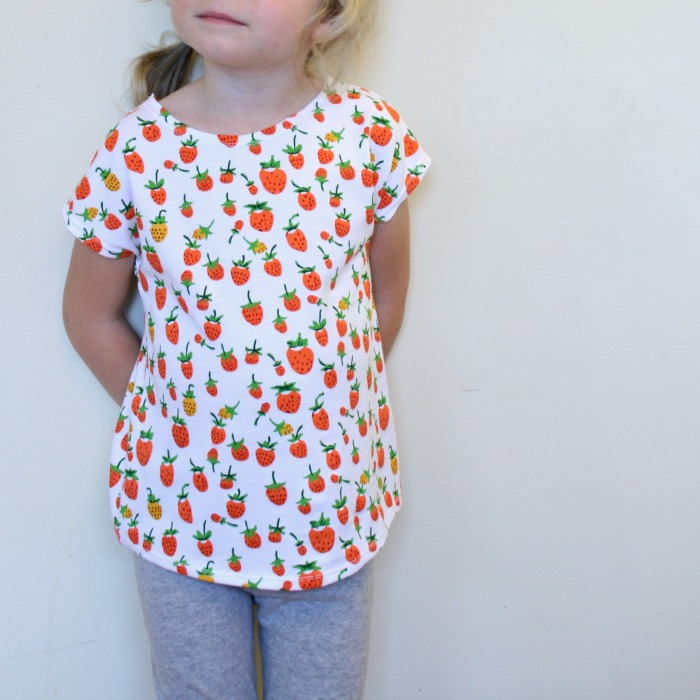 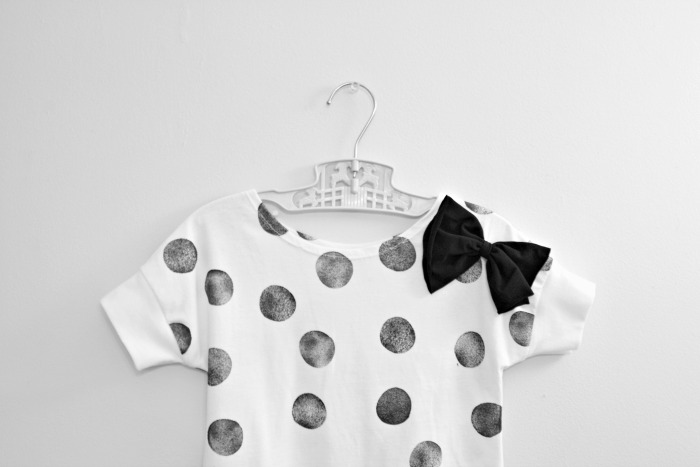 I was thrilled when Abby of Sew Much Ado asked me to be a part of the pattern tour for her new pattern, The Skipper Top.* It's a fun girls t-shirt pattern for sizes 6M-10. Having tested a couple of Abby's patterns in the past, I know what high quality work she does. Her patterns are well-written, clearly photographed/illustrated, and always result in a truly wonderful finished product.

Several months ago she had sent me a copy of her pattern for The Seafarer Top, which is the women's version of The Skipper Top. I basically live in t-shirts and jeans, so I was super excited to give her easy (and so cute!) pattern a try. But I put it off for a few weeks too long... and then found out I was pregnant... and then laid on the couch feeling sick for what felt like months... and then my belly was too big to fit into a regular size t-shirt. Booooo.

My Seafarer days will have to wait until after the little Mr. graces us with his presence, but, in the mean time, I was able to get a feel for just how quick, satisfying, and flattering these t-shirts are by sewing up a couple different versions for Olivia.

I've made two of these cute little Skipper Tops so far. Both were straight cuts of the 5T size without any lengthening or other alterations. I used a double needle on both (most of the time... until my double needle and I got in a fight), which worked really well.

The first one (above) was about as basic as you can get. The pattern comes with instructions for mixing and matching several different variations--cuffed sleeves, banded waist, banded neckline, two different pockets--as well as a really simple version with a fast and easy hem around the sleeves, neckline, and hem. The shirt you see above is basically just the front and back pattern pieces sewn together with the edges finished. It really couldn't get any easier. I wasn't timing myself or anything, but I'd say I could probably finish another basic Skipper Top like this in about 30 minutes or less. 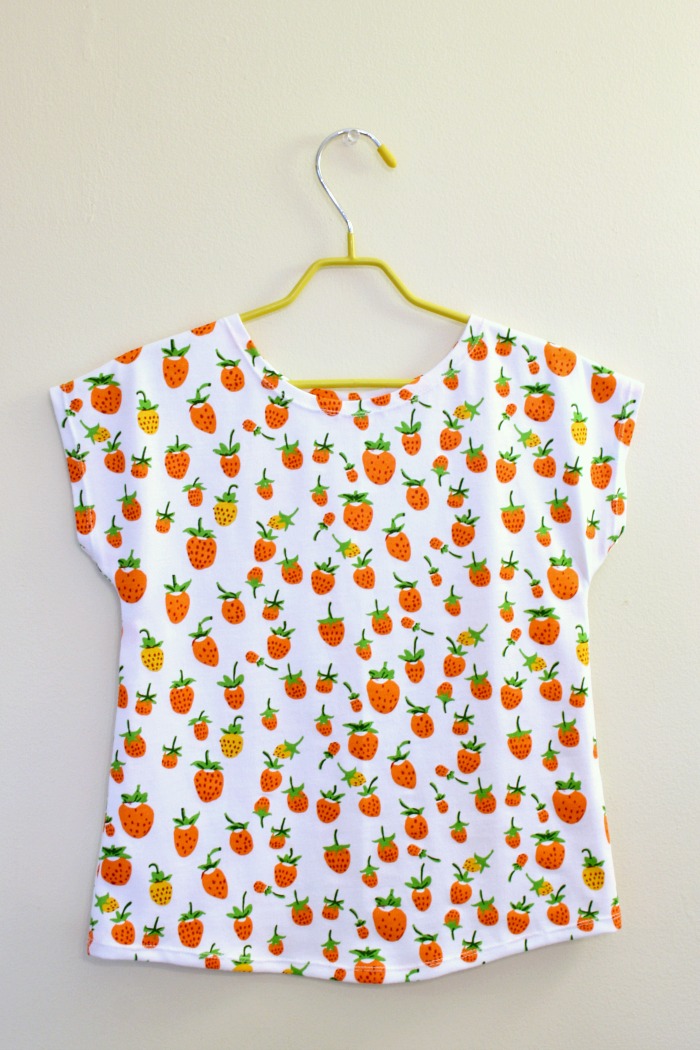 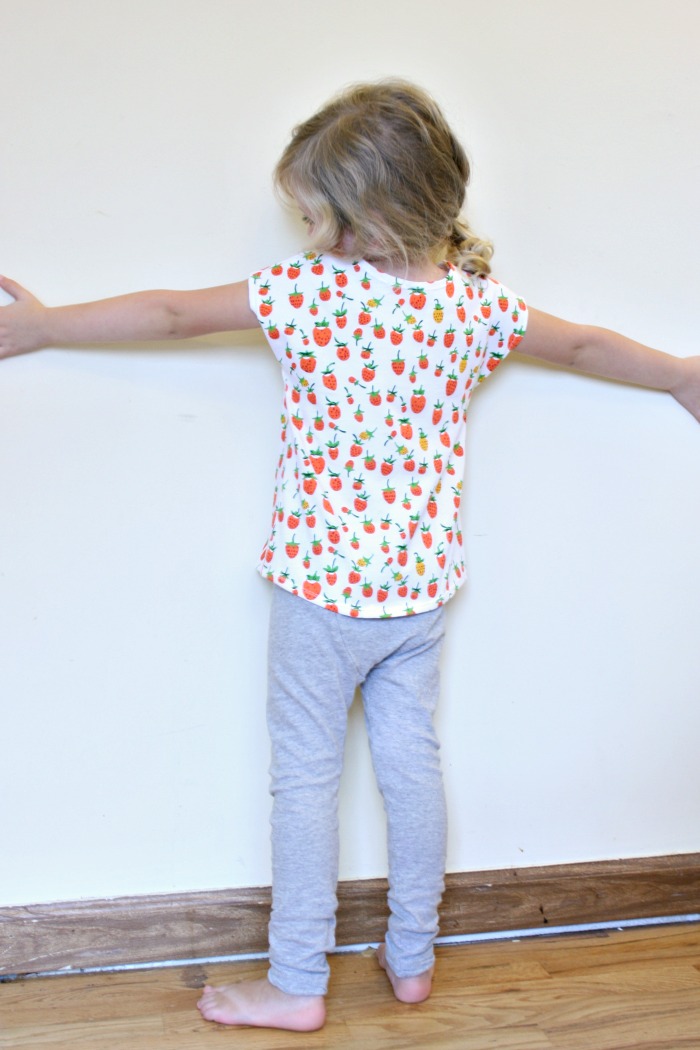 I was worried, after I finished it, that it would be too short on Olivia. Mostly because everything is too short on Olivia. (Well, shirts anyway.) So I had already prepared myself to have to say something like, "It'll be a really cute pajama shirt." But look! I was totally wrong! When I tried it on her I was delightfully surprised to see that the length was perfect. She wore this strawberry version around all afternoon and evening after we finished taking pictures and it wore so well, not too short at all. It also moved really well on her, which I so appreciate. A lot of the shirts she has right now that fit her well are either long and baggy, but tend to fall off her shoulders, or cute and fitting, but too short when she actually starts to move around and play. Hooray! I'll definitely be making more of these. Oh wait! I already did! 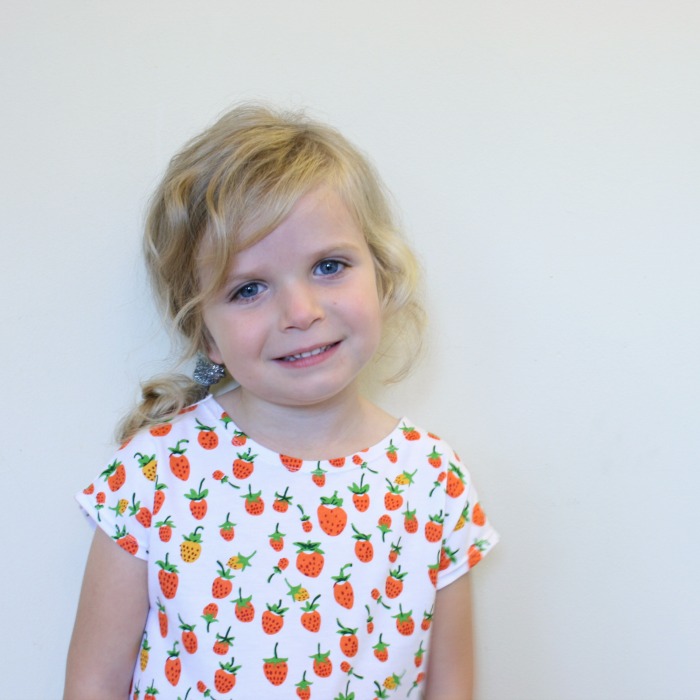 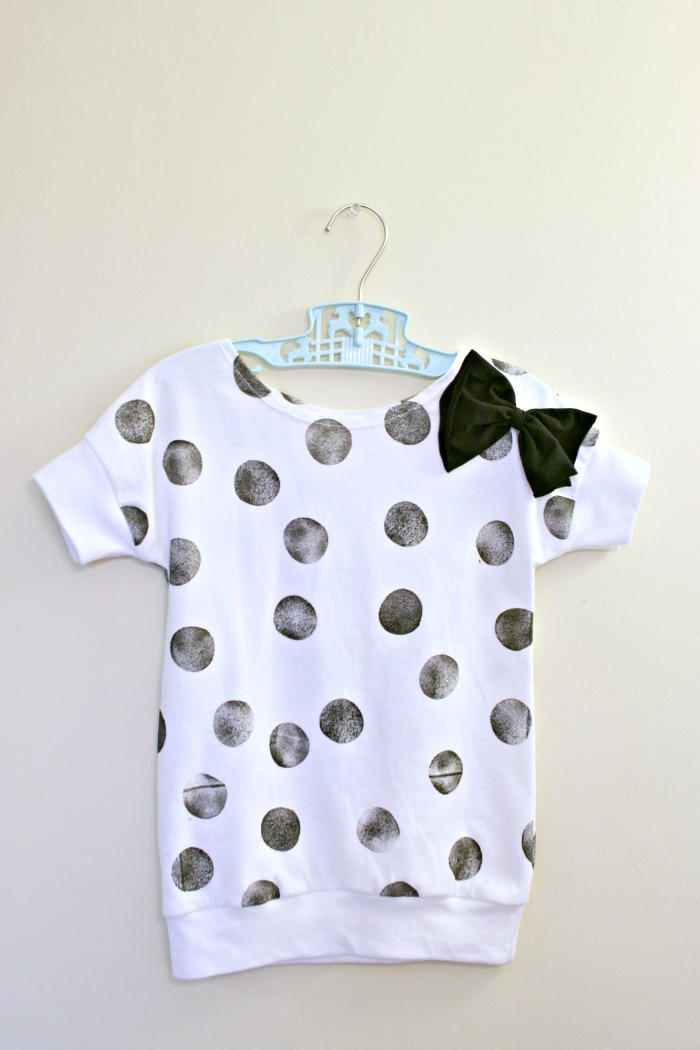 The second Skipper Top I made for Olivia included the fitted bands around the sleeves and waist. I had originally intended to add the band around the neck as well, but... uhh... I forgot. Heh heh.

I loved the feel of this white knit I had in my stash (an old sheet I got at the thrift store a while ago), but I didn't think a plain white shirt for a 4 year old was the best idea, so I decided to add a little something to distract from the future inevitable stains. I considered a few different options and finally settled on stamping it with a hand-carved stamp and fabric paint. (I have a tutorial for doing this here.)

I'm still not sure about my decision to go with big black dots. In my head it was going to look awesome and chic. Then I started stamping and it just looked like a dalmatian. But once it was finished and the bow was added, well, I guess it started to grow on me. :) 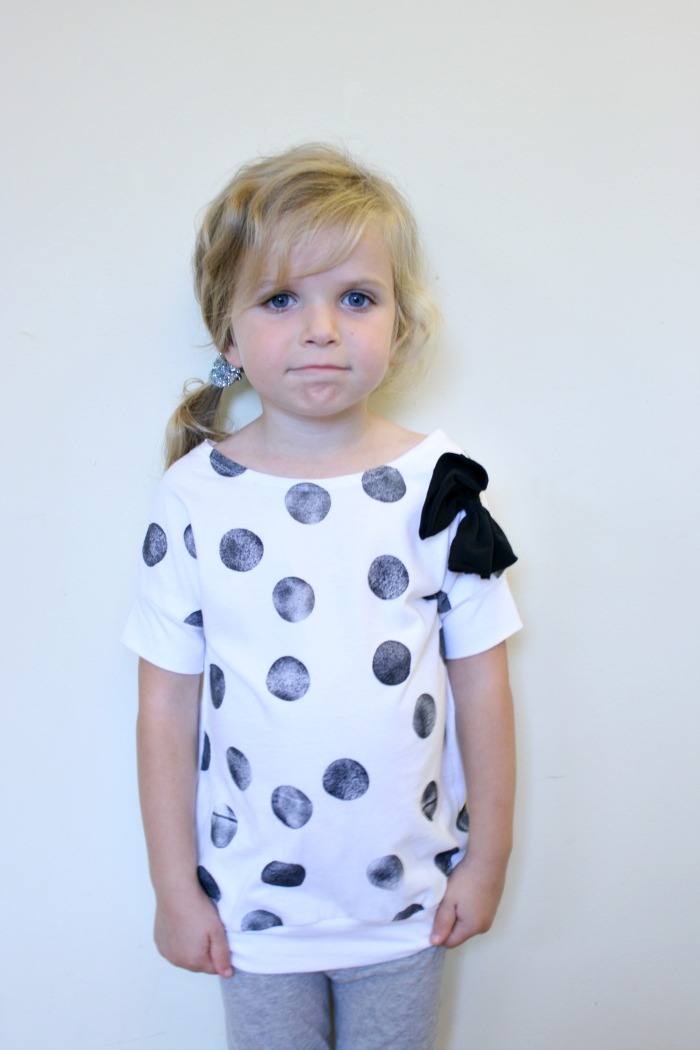 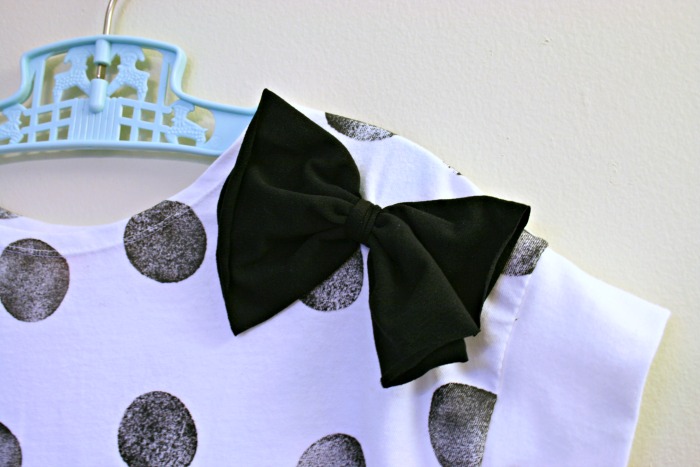 I decided to add the bow for two main reasons. First of all, it made the shirt look less like a dalmatian. And second of all, it did a very nice job at hiding one of my stamping mishaps. :)

I made it using a random scrap of black tights I had laying around. I cut a rectangle (tube from the tights), tied a scrap around it, and called it good. Once the shirt was finished I hand-sewed it in place. Easy peasy. 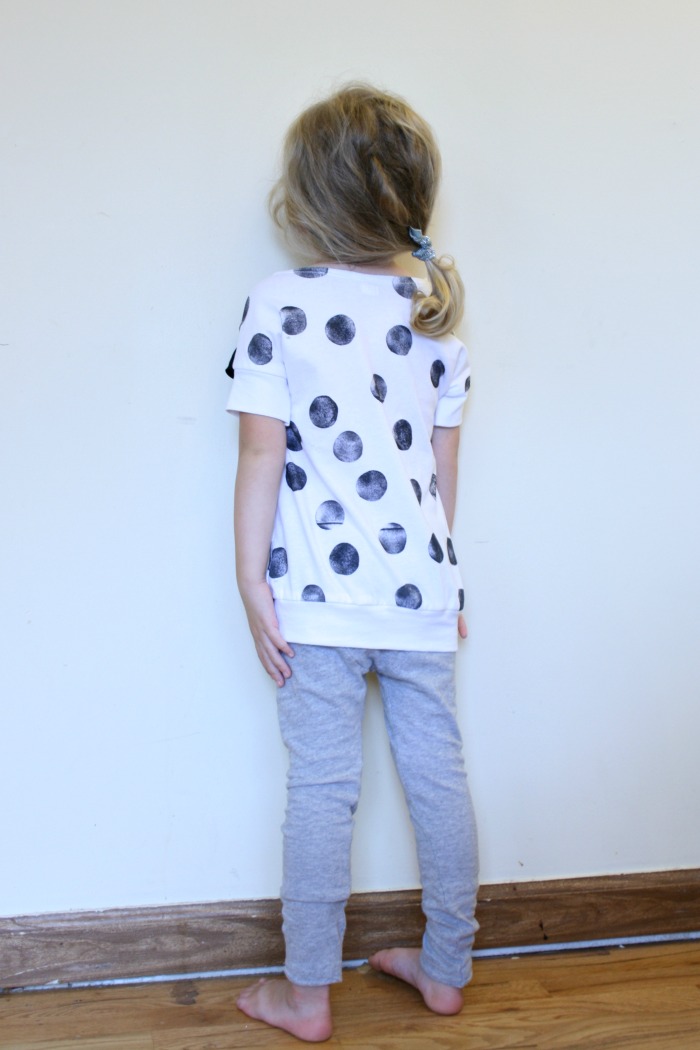 As you can see, the wait band does add some good length to the shirt. The bands around the sleeves also add some length there. I can't say I really have a preference of one fit over the other. They're both good, just different. 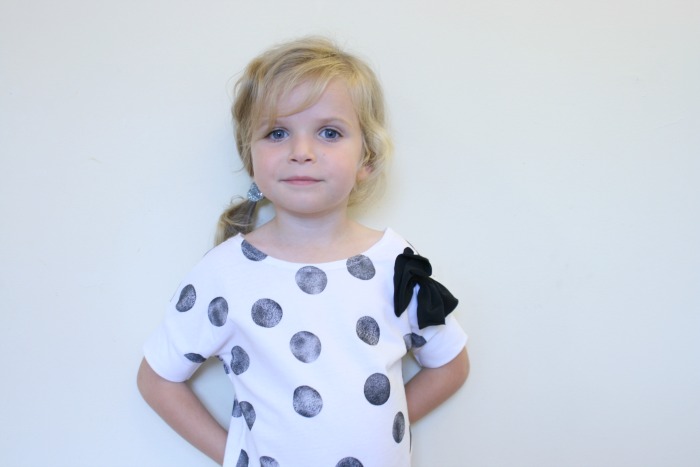 Olivia was in tears before we took these pictures, crying and whining that she didn't want to put the shirts on and take pictures. (Hey, life as a model is hard work!) So I did what all good blogging moms do and bribed her with the promise that we'd make cookies together after we finished taking pictures if she smiled nice, etc. etc. But once she had the shirts on, she didn't want to take them off. In fact, she wore that strawberry shirt (the last one we photographed) for the rest of the day! Now that doesn't happen very often.

Final verdict? Olivia and I give The Skipper Top pattern two big happy thumbs up! It's a fast, easy pattern with lots of fun variations and really great fit. Hooray for awesome patterns! 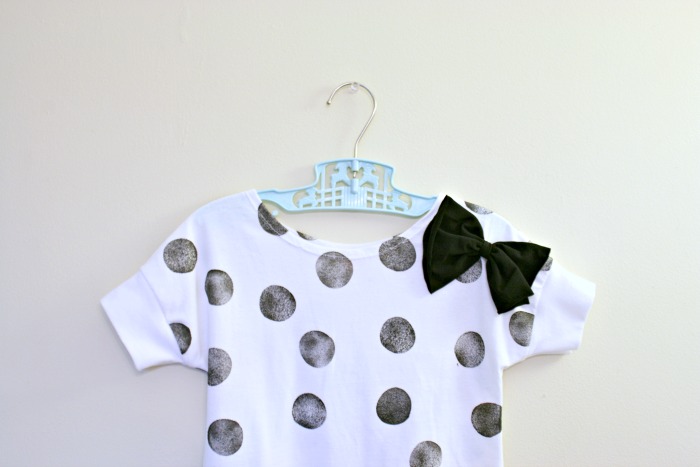 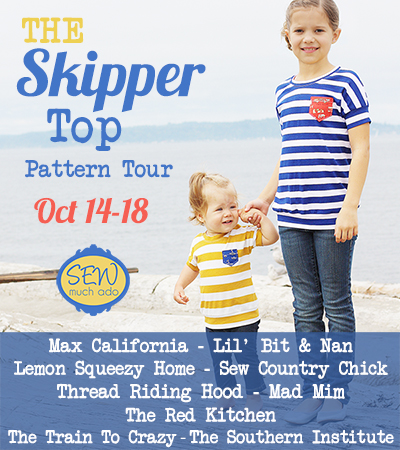 *Although The Skipper Top pattern was given to me for free, the opinions expressed here are my own. The reason I accepted Abby's offer to participate in her pattern tour in the first place is because I've had a lot of experience with her patterns in the past and I have continued to love, use, and re-use her patterns throughout the years. One of my all time favorites of Abby's patterns is the Ruby Lou doll, which I helped test before the pattern was released. I've made so many Ruby Lou dolls now that I've lost count. :)
Posted by Katie Lewis at 7:00 AM

I love the dots with the bow! It's my favorite. Very adorable. And I'll have to thank Abby for introducing your blog which I am now following. Thanks! :) sherri@threadridinghood.com